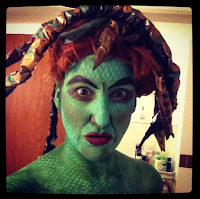 Happy bonfire night! Dan and I are recovering from both a jetlag-inducing but wonderful trip to Toronto, and our annual Halloween costume insanity which this year began with papier mache and glue in August and ended shortly before we got into a cab on Halloween to go and party. This year, continuing my obsession with 80s fantasy films, we went as an ensemble from Flash Gordon.

Having used cheaper bald wigs before, I invested in a proper Mehron bald cap kit which comes with liquid latex and a bunch of different foundations for blending. Should you need to appear hairless, I recommend this approach.

Fancy dress (or cosplay as the younglings call it) has been a tradition in my family for as long as I can remember. My mom was a wizard at making something out of nothing, and the challenge for me is always to make a costume as cheaply and inventively as possible. I'd no more hire a costume than dress as a sexy zombie.

I also firmly believe that costumes should be something you always wanted to dress as, something you love. If you love it then it doesn't matter if anyone else has a clue who you are.

Last year I dressed as Prince Colwyn from the incredible 80s British fantasy film Krull, which hardly anyone has seen. You'd know if you had, it's nuts. Dan went as the cyclops character from the same film but ran out of time to attach his latex mask. I've seen better cyclops, I won't lie. But the effort is the thing.

A few years back I made a costume that I'd wanted to do pretty much since childhood. You've seen the Tom Hanks film 'Big', right? Dan was Kuato from Total Recall.

The year Ray Harryhausen died, my costume was a tribute - his Medusa from 1981 film Clash of the Titans. Not sure I'd do a full body paint again, pretty much impossible to keep intact even with a layer of hairspray over the top.

When a friend had a 'golden age of TV' themed party, I could finally fulfil my ambition of being Richard O'Brien from The Crystal Maze. Dan ran out of time and had to buy a Teletubby costume, which would have been an unforgivable sin had it not been so funny.

The Rod Hull and Emu costume below will be baffling to non-Brits, but trust me, it's a corker. I made a fully working Emu puppet from crepe paper and faux-suede, and chased people around the garden with it. By the end of the night my arm was dead but I think we can all agree it was worth it.


There have been many, many more costumes over the years. So many more. Most pre-date camera phones, and are delegated to memory or a dusty album under the bed, but it's always been worth the effort. If you're tired of playing dress-up, you're tired of fun. Let's see your real character. 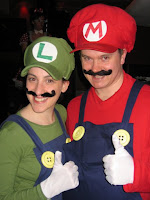