Chris Hadfield's It's Not Rocket Science

When I was a small girl I wanted to be an astronomer. I also wanted to make cartoons. My best friend and I spent hours writing and drawing a planetary guide for kids like ourselves, mostly copied from the Osborne Book of Astronomy which I still have. It’s hilariously outdated now (poor old Pluto). My cartooning developed in a weekly comic strip about a hunky scientist and his amazing hair, a coincidental prediction of Brian Cox. I wasn’t the best artist, but I didn’t care. The point was to say something that I wanted to say, whether a big important point about the universe, or a daft joke. They hadn't invented Twitter then, you see.

Many years later I had a career in marketing and a copy of what was then new software, Macromedia Flash (since acquired by Adobe). Anyone could learn to animate in Flash, and so I did. Badly, but again the point was to make something rather than just thinking about making something. I made stop-motion comedies from LEGO, pilots for kid’s cartoons that would never be finished, and the beginning of a science CD-ROM inspired by Incarta. Not at all sorry I didn’t finish that one.

Then the marketing career took over, and I left my ambition alone (but not forgotten) until Thursday December 18th 2008 when I saw Tim Minchin perform his beat poem Storm at Robin Ince’s 8 Lessons and Carols For Godless People at the Bloomsbury Theatre. That night I said to my partner, Dan ‘DC’ Turner, “let’s make that poem into an animation” and three years later the world said “hey that’s great!”. So we quit our day jobs and started an animation company to make, in the main, science cartoons.

If you’d said to me last year “if you could make a science cartoon with anyone, who would it be?”, I’d have said the astronaut Chris Hadfield. So when Chris tweeted that he was planning a YouTube series and was looking for animators, I emailed. I explained about our work, our passion, our ambition. I sent Writer/Producer Evan Hadfield links to our work, and we created some concept art. “He needs a funny sidekick”, I told Dan, “does Chris have a dog?”. Dan Googled, “he has a pug!”. Awesome. Pugs are hilarious. We put Albert the pug in our pitch. It worked.

So this is the series, It’s Not Rocket Science. We’ve launched a Patreon if you want access to making-of stuff, exclusive videos and photos, even signed Chris Hadfield books. The series will launch on YouTube this Autumn, and I’m very, very excited. I hope you are too. 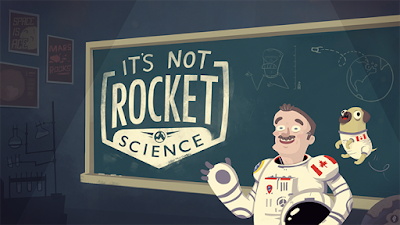 PS If you’re thinking “yeah but what of your failed ambition to be an astronomer?”, as a kid I variously wanted to be an air hostess, a dancer, a lawyer, Prime Minister, and a truck.
Posted by tkingdoll at 01:22