The Janitor or the Dude Who Ran the Water Slide

"Throughout history, every mystery ever solved turned out to be...not magic"

About seven or eight years ago when I was fairly new to organised skepticism scene, a major TV channel invited me to participate in a show about ghosts. I was to spend the night in an allegedly haunted castle and debunk whatever claims the owners made. I was very excited to be a real life Daphne and too inexperienced to realise that no payment, including no travel expenses, was a huge red flag.

My then-husband Phil and I drove several hundred miles and met the crew. There were other people being filmed too, a young girl who "definitely" believed in ghosts, and a young guy who said he wasn't sure but had the air of a creduloid. They filmed us pretending to arrive together. We had to get out of a people carrier, stand in a line and walk purposefully across a vast lawn towards the castle. It was silly and less Scooby gang than it sounded.

As the resident skeptic couple, Phil and I needed to be split up. They sent him off with the young guy and a camera, and paired me with the girl. We had to walk around the grounds filming ourselves talking about whether ghosts are real. I told her about the research into industrial fans making eyeballs vibrate, causing hallucinations which are easily confused with ghosts. She looked skeptical which annoyed me. That was my job.

As it started to get dark we were introduced to the owner and promoter of the castle, a nice earnest fellow. We walked all walked through the grounds and graveyard chatting, as a warm-up. He told us the story of a couple in the 80s who were driving along one of the nearby roads and hit a white figure, probably the ghost of a woman who had drowned herself in the pond. When they stopped and got out, the figure had gone. "There's an owl sanctuary on the grounds", I said. "Wasn't it more likely a white owl that simply flew off?". "That's a possible explanation, yes", he said kindly. "That's a good point, can you say that when we're filming?" asked the production crew, so we did it all again. This time, when I asked "could it have been an owl?" he looked at me and firmly said "no".

I was cross now. Telly was a lie. We did a tour of the church and he told us gruesome spooky stories. I presented alternative explanations and got ignored, although the crew continued to film everything. There's always hope for a friendly edit. But then the tone changed. "Back to the castle!" said the crew. They gave the believer girl and I a torch between us. "We want you two to spend the rest of the night locked in the haunted bedroom with the lights off". "What for?" I said. "That's hardly the environment for serious skeptic study". I knew why. It would be good TV. Scare the skeptic. We were supposed to sit in the dark spooky room and read the guestbook by torchlight. It contained all the messages from previous guests about what Terrible Spooky Things they'd experienced while there.

Meanwhile they'd got rid of Phil by sending him off round the castle on his own with a handheld camera. Phil wasn't good telly, too stoic and unshakable. I went to find him and told him about their ridiculous torch-and-locked-room plan. "I'm not doing it", I said. "It's stupid. It's not why I'm here. This is bogus and I feel used". Phil agreed. We went to the producer and said there was a family emergency. It wasn't a lie, I did have a close family member in hospital at the time and could have done with leaving early anyway, but it wasn't the main reason we left. It was about 1am. I should have been honest. I could have said my piece and suggested something different. I didn't have the confidence or experience to do that, and I was under the distinct impression that my 'role' had been decided already. It just all felt dirty.

On the five hour drive home we had to pull over so I could throw up from stress. Or ectoplasm, I don't know.

When the show came out, it was actually quite skeptical in tone. I'm still sure they were trying to get footage of a skeptic being scared, but it didn't turn out to be entirely the anti-science puff piece I was afraid of.

Then a few years later I saw an article about the castle in a very reputable publication. It said that "a well-known skeptic" had been "frightened away in the middle of the night". The castle were using me to sell their ghosts! If I'd stayed, they wouldn't have been able to do that. Then again, the story might have been "skeptic scared to death from reading spooky stories by torchlight; new ghost sighted at castle". 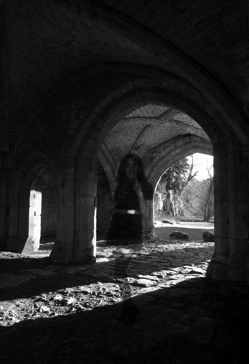