In a large school playground in England circa 1990 my friend Zowie told me about a new Hollywood actor. She promised she'd show me a picture of him at lunchtime, and so she did. Handing me a torn out page of a teen magazine, Zowie asked if I agreed that he was a fine-looking fellow.

This is that page: 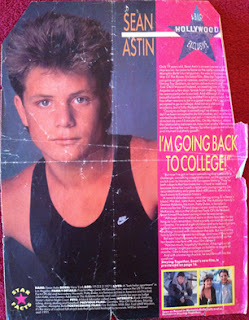 As best as I can remember, the second I saw that photo, my heart leaped into my stomach, my stomach parachuted to my pelvis and my pelvis, grabbing the message, shot all the way up to my brain and yelled "TRACY'S IN LOVE". I was thirteen.

During afternoon break I asked Zowie if I could swap something for the page. Sure, she said magnanimously, then declared that she actually preferred Johnny Depp or whoever. I gave her a fifty pence piece for it.

The photo is of Sean Astin. Yep, that guy. Sam 'po-tay-toes' Gamgee from Lord of the Rings. Before he was simply walking into Mordor he was a teenage hearthrob and I was struck with instant head over heels infatuation. His star was rising so there was no shortage of magazine articles from which to take clippings and posters. I covered my wall in them. The one I'd most try and magic to life (come on, like you never whispered secret mystical words) was this one. Oh my. 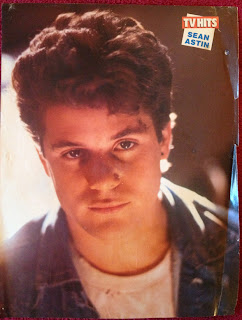 My mom bought me Memphis Belle on VHS. I watched it over and over, you know the drill. You're probably thinking of whatever film got you that way. (If it's Twilight, get out). My poster and clippings collection spread across the wall like ivy. If there was even a mention of Sean Astin, a few printed words about him or even just his name, I'd dutifully snip them out and smush them into the wall with blu-tak. 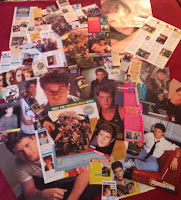 Here it all is. Of course I still have the whole lot, I keep it in a folder in a box with old Valentines cards and diplomas for skills I don't use.

When the object of your desire is a celebrity, they literally are an object. Cut-out words and photos, an increasingly grainy VHS tape, nothing you can talk to and ask questions of. The clippings were a surrogate and the surrogate was not enough. Reflected glory started to kick in. It's a type of essentialism virus, I guess. Your friend's cousin is going out with a bloke who used to go out with a girl from Game of Thrones. Your dad once met Hulk Hogan in a waffle house. In my case, I read in an interview that Sean Astin was best friends with Wil Wheaton and they were starring in Toy Soldiers together, so I started cutting out his photos and name, too. I didn't even fancy him. Sorry Wil.

Now, if I was thirteen today, I could simply Tweet at Sean Astin or Wil Wheaton and the chances are, they'd see. The chances of either (or anyone of sufficient fame) replying to whatever the thirteen-year-old me was saying is slimmer. The chances of Sean Astin falling for my teenage avatar and us living happily ever after, not enough zeroes to describe. Thank goodness Twitter wasn't around during my awkward crush.

But it is around for the kids today who don't rely only on the surrogacy of magazine clippings, but can see their beloved's words in real time, a real person. So they do the most natural thing in the world, they confide in him and try to get his attention.

The most remarkable examples of this are shown to us by the Harry, My Cat Died Twitter account, which retweets fans of One Direction's Harry Styles and their desperate attempt to get attention. Run by comedian @FrizFrizzle (disclosure, he's a friend), most of the retweets are of fans (usually young girls) telling Harry that their cat, dog, hamster, friend or even close relative just died, and how sad that makes them. Some ask for a reply, others ask for nothing. The really bold ones ask to be followed back. The number and frequency sort of suggests that maaaybe some of these fans are stretching the truth to elicit sympathy (although as far as I know Harry doesn't respond...or maybe he did once and rumour persists that it works), but it's a certainty that some of them are real bereavements.

I know it's a certainty because I did it myself, the oldschool way. A little while before I bought Sean Astin for 50p, one of my parents died. That's some hard crapola for a kid to deal with and I didn't have an easy teenhood as a result. So, I wrote to Sean Astin, care of his agent in Los Angeles whose address was printed in a teen mag. I wrote pages and pages telling him about me and my life and grief and how his existence was a comfort and would he please please please write back. It was Sean, My Dad Died, and yes of course it was a silly awkward thing to do and no of course I didn't get a reply. My letter came back, return to sender. Utter heartbreak.


A year or so later I was excited to find a different address, and resent my TMI letter. One morning I saw I'd received a postcard from America, and read it with a sinking belly:

Turns out it wasn't possible to procure a "money order" for eleven dollars in early nineties England. I clearly remember the woman in my bank saying she'd never heard of such a thing. I left, defeated, resigned to my poster and clippings collection.

The letter probably didn't get past whoever's job it was to handle the fan mail and send those prefilled poscards. But Tweeting a celebrity, that's like being able to put the letter straight through Sean Astin's own front door. So when I see young kids being mocked for their Harry, My Cat Died Tweets, I feel a bit sad. I want to give them the benefit of the doubt. I want Harry to reply, saying "I know you're not crazy, and you will grow out of this crush and then you'll question why you thought I'd want to know your cat died and you'll realise why you got mocked. But I love you anyway".

So in solidarity with those kids, I'm telling you this tale of fandom, grateful I've grown out of it. I don't even follow Sean Astin on Twitter, lest he doesn't reply. I don't think my heart could take it ;)
Posted by tkingdoll at 12:58