On my 21st birthday my best friend and I decided, out of boredom, to get tattoos. We pooled our cash and had £7 each, hardly enough for even the smallest bit of ink of but as neither of us had any idea what design we wanted it didn't really matter.

When we arrived the designs in our price-range (after a little negotiation) were mostly symbols - Egyptian ankhs, Celtic crosses, that sort of thing. All small, all black, all commonplace. There were, however, several pages of Japanese ideograms that we both found very attractive. Today I would tell my younger self "you've never been to Japan, don't borrow from a culture you haven't experienced unless you've at least done some basic research, you massive dicksneeze", but younger me wouldn't have listened or may have said "lay off the chocolate" in response.

So, liking-but-not-understanding Japan and its culture and language as I did, I chose the symbol for "woman", as it was my 21st and that seemed apt. Also it would have been useful in a scenario of selective amnesia where I could remember everything but my gender.

"Where would you like it?" asked the burly man, and I replied "where hurts the least?". Top of the arm, apparently, so that's where I had (a simpler version of) this symbol inked, permanently, into my skin: 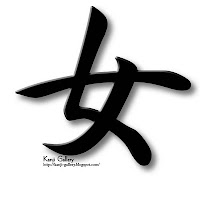 I loved it. I wore sleeveless everything. It felt a bit exotic, a bit mysterious, a bit dangerous. "What does that mean?", people would ask. If I liked them I would tell them. If I didn't I would say "chips" or "tattoo" or "bugger off!". But then I started to notice more and more people with Kanji (Japanese writing) tattoos. It was becoming trendy. Or maybe I was just seeing them because I was now conscious of them. Why would the tattoo parlour have a book of them up front if they weren't already popular? Oh no! I'd...I'd...conformed! To a trend! It gets worse. So much worse. This happened.

Why, it's Sporty Spice! And what's that atop her arm in the exact same place as mine? GODDAMNIT.

I persevered. I still liked having a tattoo, and so what if I had something in common with the charming and successful Mel Whatever? Years passed. Then one day I was having a swimming lesson in the kiddie pool (still can't swim, fyi) and a Japanese woman started looking at me strangely. Eventually she waded over.

That's right, readers. It means 'woman' in the same way that THIS does:

It took years, I promise, for that to be funny. Eventually it was funny, then it was hilarious, then it was a good story to tell in pubs. Then my arms got fatter and it started to stretch so I'm paying to have it removed slowly and painfully by laser. In a couple of years I may have another tattoo over the scar. I love them, I just don't love mine. But if I do, I'll go for something safe. What's the Japanese for "please piss here?". 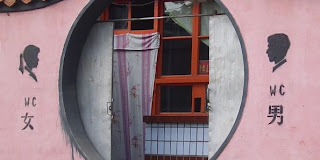